I attended 85C Bakery’s newest location in Plano tonight. Though widely known for its affordably-priced bakery items; the name is derived from the temperature coffee tastes the best…85 degrees Celsius. Bottom line: I love coffee and I love baked goods and 85C Bakery has plenty of both. 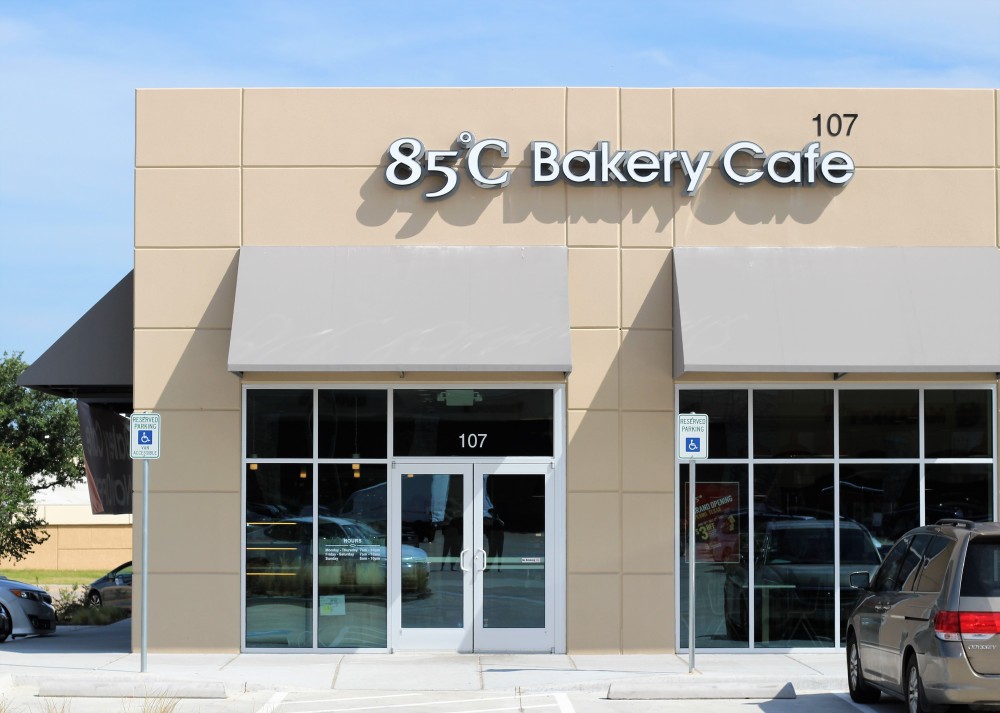 When I entered the bakery I was greeted by case after case of egg-washed, freshly-baked sweet and savory goods. The baker is self serve; picture a cafeteria-style bakery. I grabbed a tray and a pair of tongs and went to picking!

There was  huge variety to choose from. There were breads, danishes, savory and sweet breads, both the ordinary and extraordinary. Ever heard of Squid Ink Corn Chicken Bread? They have it!

After I loaded my tray with all the goodies, I headed to the counter where all the items were individually wrapped and boxed to take home. Feast your eyes on this…

And here they are all wrapped and ready to go home…

The savory line up started with the Spicy Sausage Bread. It was like an open-faced pig-in-a-blanket. Nestled in the center of the bread is a pork sausage link. The beauty is then shredded cheese, mayo and Sriracha Chili sauce. This was very flavorful. The sweetness of the bread offset the spice nicely. 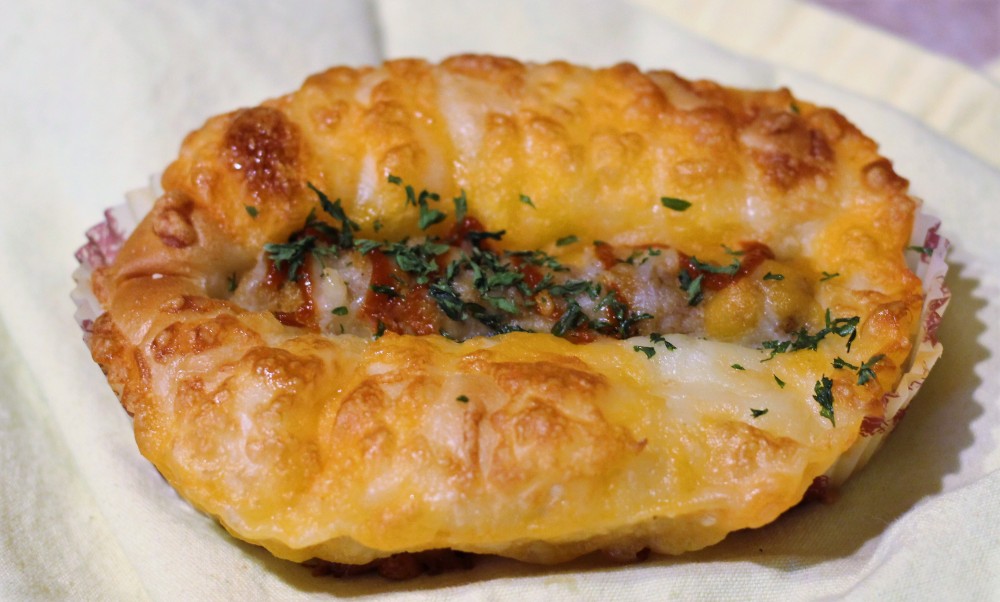 Next on the list was the Honey Teriyaki Chicken. This soft bread is full of perfectly seasoned and moist chicken. I really enjoyed the chicken because it was marinated IN the honey teriyaki sauce, rather than spooned on top after the chicken is cooked. Where the sausage bread was spicy, the chicken was smooth and sweet.

Last up on the savory pickings was the Spicy Green Onion Chicken Bread. Similar to the Spicy Sausage Bread, this sweet bread is topped with chicken, green onion, shredded cheese and Sriracha Chili sauce. It was hearty and packed with flavor.

What about the sweet  baked goods you ask? Here they come….

I started satisfying my sweet tooth with the Coconut Twist. This was my favorite! This girl loves coconut in all of its forms. The sweet bread had a coconut filling that was perfect. It wasn’t too heavy or overpowering; more of a paste than a cream. It was just enough. They added raisins and almonds for a nice touch. I need another one!

I continued with the Chocolate Croissant. It was flaky and fresh with a nice, creamy chocolate filling. A good standard! 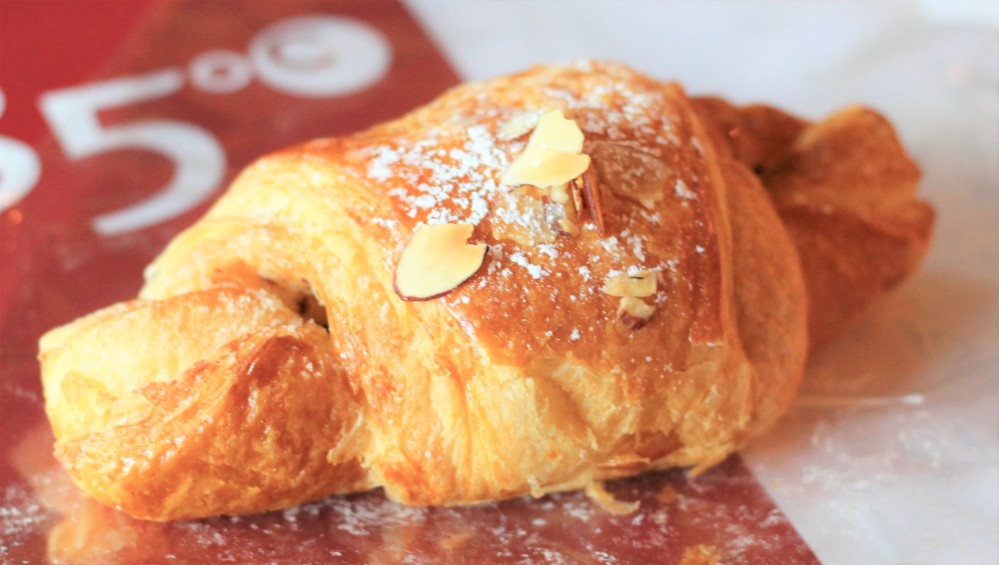 Keeping with the chocolate theme, I dove into the Chocolate Bowl. This pastry is ENORMOUS. I shared…it was difficult, but I did. I swear it weighed a pound. To give you an idea of the size picture a bowling ball cut in half. This bread was loaded with chocolate chips and topped with powdered sugar. We tried it right out of the bag and it was really yummy. The next morning I sliced it thin, toasted it and spread it with a little butter. It was the perfect breakfast…warm, sweet and salty. 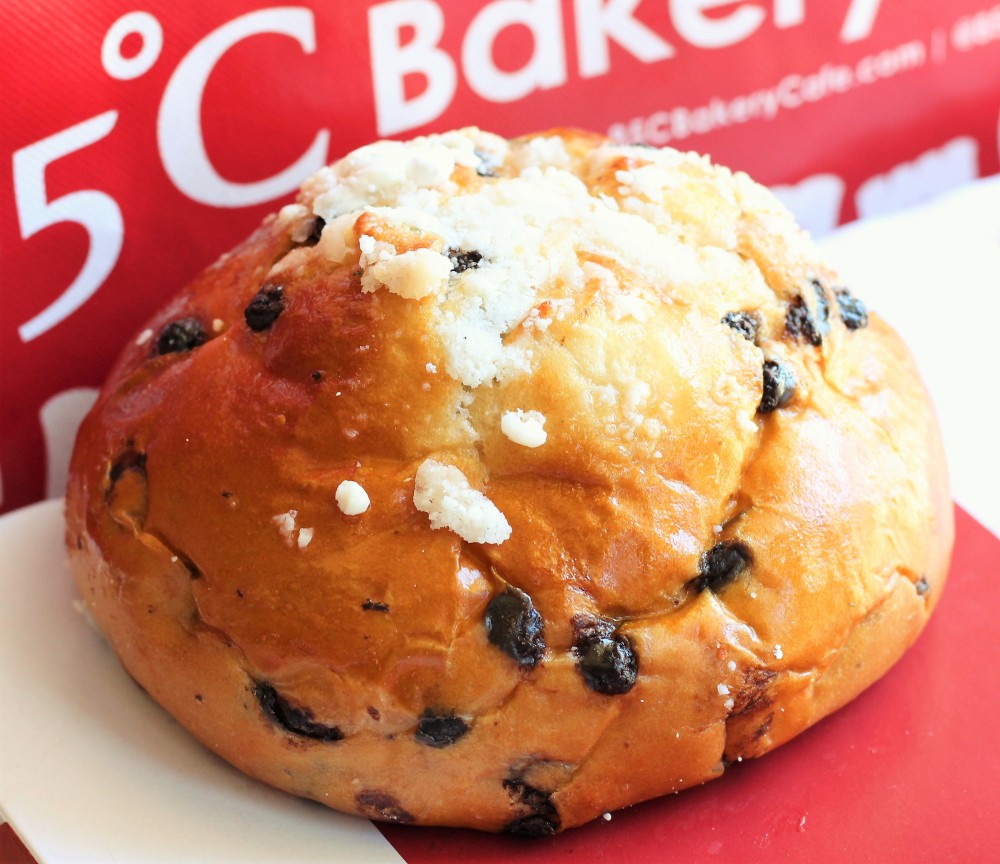 I wanted to try something not available in most bakeries, so I opted for the Taro Swirl. Taro is a root vegetable. It has a purple tint to it with a mildly sweet taste. The Taro Swirl dough reminded me of a croissant-light and airy. The taro paste inside was sweet without being overpowering. It was very pleasing. 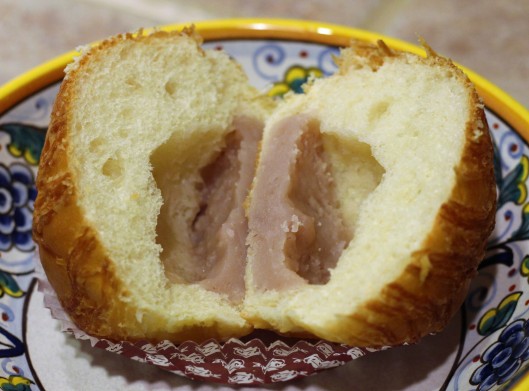 I finished up the sweets with the Mangotale. As if the mango wasn’t enough; it was even better because it has cream cheese in it! Oh goodness me! This was a tasty delight. The citrusy mango and the creamy cheese. I want to try this in every flavor.

I was also introduced to a couple of 85C Bakery’s signature libations. The first drink was the Iced Sea Salt Caramel Coffee. It was so sweet and decadent it could be a dessert in its own right. The base of this drink was a strong but smooth Guatemalan coffee. The iced coffee was then topped with a sea salt cream and caramel. My second choice was the King Grapefruit Green Tea. This was the real deal. The brewed Jasmine green tea was combined with an entire grapefruit reamed into the glass pulp and all. The hollowed out grapefruit was floating right on top in all its glory. It was refreshing and tasted like summer!

Now that 85C Bakery has 3 locations in the Dallas area you have no excuse not to go. It will only take one trip to be hooked.

Thanks for the hospitality 85C!

Until next time, just eat it up!